Given two sentence (premise and hypothesis), Natural Language Inference (NLI) is the task of deciding if the premise entails the hypothesis, if they are contradiction or if they are neutral. Commonly used NLI dataset are SNLI and MultiNLI.

Conneau et al. showed that NLI data can be quite useful when training Sentence Embedding methods. We also found this in our Sentence-BERT-Paper and often use NLI as a first fine-tuning step for sentence embedding methods.

To train on NLI, see the follwing example files:

In our experiments we combine SNLI and MultiNLI, which we call AllNLI. These two datasets contain sentence pairs and one of three labels: entailment, neutral, contradiction:

Conneau et al. described how a softmax classifier on top of a siamese network can be used to learn meaningful sentence representation. We can achieve this by using the losses.SoftmaxLoss package. 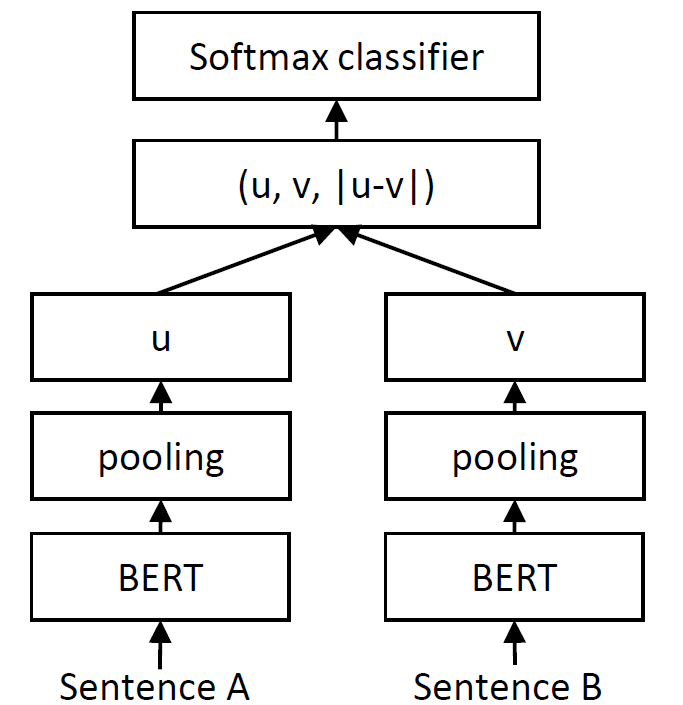 We pass the two sentences through our SentenceTransformer network and get the sentence embeddings u and v. We then concatenate u, v and |u-v| to form one, long vector. This vector is then passed to a softmax classifier, which predicts our three classes (entailnment, neutral, contradiction).

This setup learns sentence embeddings, that can later be used for wide varity of tasks.